An integral part of the Chymistry of Isaac Newton project involves the replication of Newton's experiments, where possible. In many instances, we can decipher Newton's directions with sufficient exactitude to enable a precise recreation of his experimental techniques. In cases where Newton clearly describes the products of his experimentation, one can even use the success or failure of a replicated experiment as a means of checking the correctness of our modern understanding of what he wrote some three centuries ago. Hence laboratory work serves as a fundamental tool in deciphering Newton's chymical endeavor and in determining the reasons for Newton's thought on a variety of experimental topics. It is essential, when carrying out such replicated experiments, to understand the seventeenth-century chymical background that underlay much of Newton's work. As in cookbooks today, chymical practitioners usually neglected to record processes and steps that they viewed as trivial or commonplace. Newton followed this practice too, of course, and the difficulties are compounded by the fact that he did not have access to modern precision apparatus, especially high-temperature thermometers. The historical researcher must therefore engage in a sort of broad-range archeology of early modern chymical techniques that can be used to supplement Newton's sometimes telegraphic recipes. This is even more true in cases where Newton alludes vaguely and generally to phenomena that were widely celebrated in the seventeenth century, such as metallic "vegetation." In such cases the modern researcher must be able to supplement Newton's comments with processes that he probably knew well but did not record in detail. In the following illustrations, the recreated products stem directly from Newton's own detailed recipes unless we indicate otherwise. 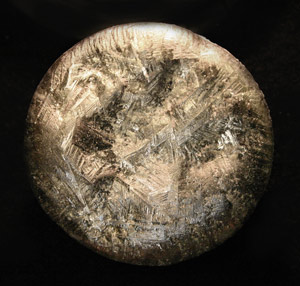 Antimony metal can be made to form a visibly crystalline structure by slowly cooling the molten antimony beneath a thick layer of slag. The antimony is reduced from stibnite (Sb2S3) by heating it with iron and saltpeter until fusion ensues. The antimony initially reduced must be further purified by repeated fusion with additional saltpeter before the star can be produced. 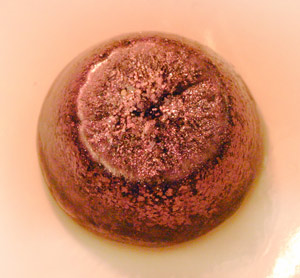 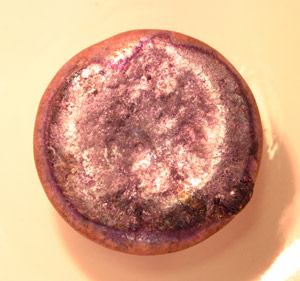 This purple alloy of metallic antimony and copper appears in many of Newton's chymical notes along with detailed recipes. The basic mode of production works by first refining antimony from stibnite by means of iron and then adding copper. Both the product and the general process for making it descend from Eirenaeus Philalethes, the pen-name of the American alchemist George Starkey. Starkey named this alloy "the net" because of the minute, regular crystals on its surface, which he interpreted as network. He argued that it was this alloy that the Roman poet Ovid really had in mind when he described how the blacksmith god Vulcan ensnared the lovers Mars and Venus in flagrante delictu in a finally wrought bronze net and left them on public display for the mockery of the other Olympians. To Starkey and Newton, the gods Mars and Venus were encoded terms for iron and copper, both of which metals were to be employed in making "the net." 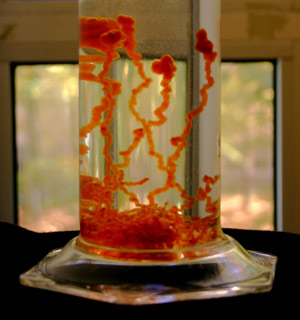 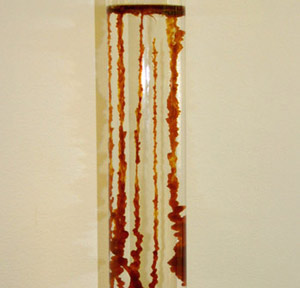 Although Newton gives no clear recipe for a silica garden among the notes that we have transcribed so far, he does frequently refer to metallic "vegetation," a term used in the seventeenth century to cover a broad spectrum of dendrites and amorphous formations grown from metals or metal salts. In the mid-seventeenth century the German chymist Johann Rudolph Glauber popularized a method of growing silica gardens from iron dissolved in "spirit of salt" (hydrochloric acid) and then boiled dry, which was then added to a solution of "oil of sand" or "oil of glass" (potassium silicate). This procedure was very widely known in seventeenth century England, thanks to the popularization of Glauber's work during and after the Interregnum.